Becoming the First Primary School of Sanctuary in Swansea 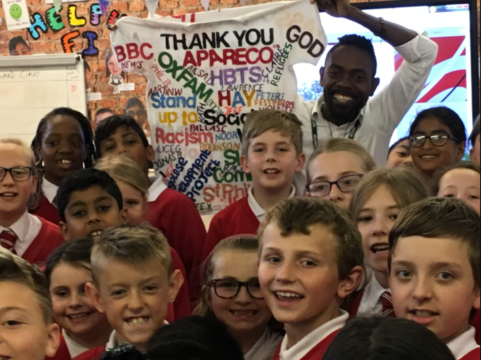 St Joseph’s journey to becoming a School of Sanctuary started in 2017, as part of the Lead Creative Schools initiative funded by the Welsh Assembly Government and the Arts Council for Wales which was entitled ‘journey’. During this project pupils explored immigration of the early Irish settlers to Greenhill and collaborated with artists Mandy Lane, Bill and Rachel Taylor- Beales. Our work from this project has been installed in the Tate Exchange in Tate Modern, London, Taliesin, Swansea Museum as part of their ‘One Abertawe’ festival and in April 2019 in The Senedd. The result of those early Irish immigrants’ hard work and labour are Swansea Cathedral and St Joseph’s school that still stand here today- a testament to the challenges and struggles they faced.

This initial project encouraged a greater exploration of the lives of refugees and the people who have welcomed them. As a diverse, multiethnic and cultural school, St Joseph’s wants 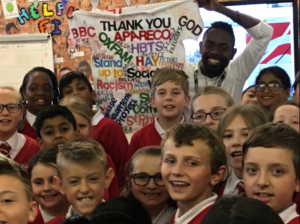 the children in their school to live in a world where every child feels safe and accepted regardless of what they believe, where they are from or what they look like; a place where cultural diversity is valued and celebrated. During their journey to become a School of Sanctuary students and staff made effort to learn about sanctuary issues, embed welcome and share their activities with the wider community.

Their second project ‘Sanctuary- the Road to Belonging’ saw artists engaging with pupils, staff and parents including those from sanctuary-seeking backgrounds in activities that explored themes of trust and belonging. This also enabled the school to review how they engage and work with individuals and with groups new to the country and local community. The entire school community – pupils, parents and staff participated in this project where children were asked to record what sanctuary and home meant to them through artwork and using their home languages. These words were then incorporated into a collaborative Sanctuary sculpture and the children also used their chosen words to write and compose a song about sanctuary. The work from both projects can currently be seen in the Oriel Science Gallery in Swansea.

Different year groups also engaged in specific learning activities. For example, Year 5 learnt about one person’s experience of seeking sanctuary when he came in to speak to the children. They learnt how it was too dangerous to return to his country – The Democratic Republic of Congo. He also explained how he had been removed from Swansea and detained for deportation but that so many people had signed a petition for his return to Swansea until his appeal is heard that he was released.

The school has also sought to improve its practice with regards to meeting the holistic needs of students from sanctuary seeking backgrounds and their families throughout the process of becoming a School of Sanctuary.

Within St Joseph’s School, there are thirty-three children who have been identified as from asylum seekers or refugee families. As this is not information gathered on the school application form, it is not always easy to identify families who do come within this category. However, knowing some of the difficult situations asylum seekers or refugee families are experiencing through poor housing, lack of safety and security and living with much uncertainty, the school seeks to sensitively engage with families in order to identify issues of vulnerability and thereby most appropriately support them. Nonetheless, this is made difficult as the Welsh Government identifies funding for schools to support vulnerable pupils through its pupil development grant which is based on families where the child receives free school meals. As asylum seeking children are unable to claim free school meals, this further disadvantages them. Despite these challenges, St Joseph’s recognises the need to integrate and support the increasing number of asylum seekers or refugee pupils and families to their school and that all children  in their care are entitled to the very best education that they can offer.

As part of their journey to improve school practice, in 2019, two members of staff went on a British Council funded fact-finding visit to Berlin to see how Germany integrated the large numbers of refugee students into their education system over the last few years, and to explore the critical role that schools play in the settlement of refugee young people, who have a specific set of challenges and needs. The programme focused on:

This work has seen them forge a close partnership with Swansea University Centre of Migration Policy Research, one of the UK’s leading centres of migration studies.

Following much learning and discussion, as a school, St Joseph’s have sought to effectively support pupils from sanctuary seeking backgrounds through their own practice. In the past, parents have approached the headteacher pleading for help and support to access services and information 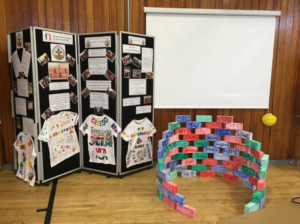 “Thank you for having me this morning, it was a fruitful meeting, and I have now realised that more than ever we need this types of sessions to be able to reach out to asylum seeking adults and children.”

Part of the school’s inclusion policy is to welcome children with a range of needs and this extends to asylum seekers or refugee pupils and their families. However, it is becoming more apparent that the school needs to be more proactive in seeking services that can help and support families as they acknowledged this has tremendous impact on progress and attainment of the children.

One way they have sought to do this is through the introduction of the Young Interpreters Scheme in which a group of pupils have been trained as interpreters using Moodle (an online learning platform) to provide support for new pupils to the school who speak little or no English. Not only does this recognise the value in students’ multilingual skills but it ensures new pupils to the school to feel welcomed, safe and comfortable.

Along with Swansea LA, Swansea City of Sanctuary and the Education Network, St Joseph’s have now sought to encourage and provide support and advice for other schools seeking to gain School of Sanctuary recognition.

In 2019, during Swansea’s 50 years as a city celebrations and fittingly during Refugee Week St Joseph’s became Swansea’s first Primary School of Sanctuary and were presented with the award by the then Lord Mayor of Swansea, Peter Black and by representatives from Swansea City of Sanctuary. Fittingly the theme of this was ‘You, Me and those that have welcomed them throughout the generations’.

“Schools of Sanctuary are for everyone:  the school itself, pupils, parents, communities, local people and people seeking sanctuary. It’s a way to engage sanctuary seekers and families with their communities and educate teachers and children about the human right to sanctuary. They are schools that are proud to be a place of safety and inclusion for all.

We are proud to be part of the Schools of Sanctuary network and wider movement of welcome, which aims to make this vision a reality and encourage people across Wales to support Wales in its aim to become the first Nation of Sanctuary.”