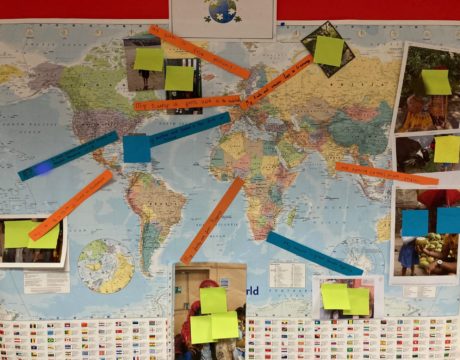 For students with little personal experience of moving countries, learning about migration and the experiences of people seeking sanctuary more specifically can often seem a distant issue or something that affects other people. To avoid “othering” those who have migrated or sought sanctuary in the UK and to overcome the misconception that migration is something people from other countries do to arrive in the UK, exploring your local area’s or your students’ own links to migration is a powerful way of countering these perceptions. This type of learning activity is often particularly important for those in contexts where students’ connections to migration may not be so apparent initially and the school community is assumed to be ‘predominantly white British’. With rapidly changing demographics across the UK – both in traditionally diverse urban areas, but also in historically less-diverse more rural areas – it has never been more important to recognise, explore and emphasise diversity.

Here we outline some ways in which schools can explore students’ connections to the wider world that we suggest should be included alongside any learning about migration or people seeking sanctuary.

Often the easiest way to help students appreciate their links to migration is by helping them to connect it with someone with whom they are close. An easy way to do this is by asking students to research their own families’ migration histories. Has their family moved from a different place (in 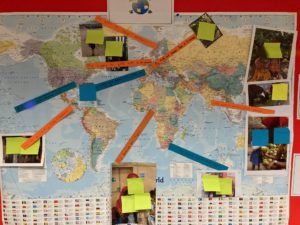 the UK or wider afield)? Do they have family members living in another country now? Maybe they have an uncle living in Australia, a grandma who migrated from Ireland or an older sister studying Spanish in Madrid? Has the student themselves moved from one city/town to another area in their lifetime? Ask students to find out about their family/household connections to the wider world: why did this person move? Can you find out a fun fact about the place from which they’ve moved or are living currently?

Looking at languages spoken within the family is another way of connecting students to the wider world whilst also recognising and promoting multilingualism. What languages are spoken in your students’ homes? Do they have other family members that speak different languages, and if so which? If the student doesn’t already speak this language, can they find out how to say hello, thank you and welcome and teach these words to the rest of the class?

Regardless of school context, you will be surprised by the number and variety of links your school community has to other parts of the world, helping to challenge perceptions of students as having a single shared background and emphasising how migration is something with which we are all intimately connected.

A wonderful way of following up these activities is to make a display showing a map of the world and asking students to place a pin in the places with which they have a connection. Can they bring in a photo of themselves or their family member in this place to add to the display?

For inspiration of how to put this activity into practice, consider borrowing from St Andrew’s Primary School in the Wirral who shared a survey using google forms with all students’

parent/carers asking about their family connections to other parts of the world and the languages spoken within the family. Despite being located in an area that is considered predominantly White British, the school felt it was important to proactively recognise any and all links students have to other parts of the world – leading to a surprising amount of responses and connections to different countries across the globe. 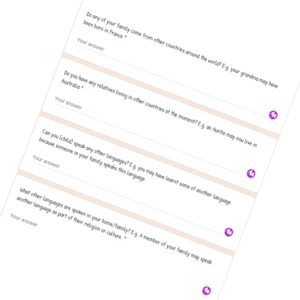 Whilst not every family participated, staff were surprised at the detail of some of the responses, which only served to emphasise how much some families appreciated the activity and felt that their cultural backgrounds and experiences were being recognised and valued. One parent shared how “the global diversity and family connections questionnaire created a sense of belonging. To be asked about our family and culture made us feel valued and our family enjoyed sharing information which could be used to help other children learn about diversity.”

The results from this survey helped shed light on students’ connections to other areas, informing future learning activities about parts of the world students have connections, recognising students’ multilingual skills and drawing on families’ knowledge and experiences to share recipes and music from their cultural backgrounds.

Another approach to bringing learning around migration home is to research the local area’s historical links to migration. Even in areas with little visible signs of recent migration will have experienced different waves of migration across different periods of history.

Which groups of people have moved to your local area over time? Why did they move there? Can you see any physical signs of their arrival today? Whilst for some areas these migration histories may be more recent: from the Windrush period or the early decades of the 20th century, in some areas you may prefer to go back further – to the arrival of French Huguenot refugees for example.

These activities help students to understand that migration is not a new or recent phenomena and that indeed there is no migration crisis – people have moved throughout history and is a natural part of human life. Instead, it is how we welcome them that might vary between groups of people and periods of time. How would your students’ want to be welcomed if they moved to a new place where they didn’t know anyone and that had different norms and culture?

To help contextualise  sensationalised headlines commonly shared in the media today within a longer historical pattern, Avenue Junior School and Hellesdon High School have explored their area’s historical experiences of immigration. For hundreds of years, communities in Norfolk have welcomed people seeking to escape war and persecution in their countries of origin. The ‘Strangers’ of the 16th century, the Jewish refugees of the 1930s, people fleeing the Vietnam War in the 1970s, Congolese families in the 1990s, and the most recent arrivals from Syria: all have played their part in creating Norfolk’s rich history as a place of sanctuary.

Inspired by the stories of both the individuals and groups who’ve sought sanctuary in their
county, pupils from two Norwich schools, Avenue Junior School and Hellesdon High School,
created individual ‘visual poems’ out of textiles and mixed media. These fabric panels were
then combined to create a large wall hanging that paid homage to The Strangers, a group of
refugees who came to Norwich from the Low Countries to flee religious persecution during the
reign of Queen Elizabeth I, and who went on to have a significant influence on many aspects of
life in the city. The wall hanging was exhibited in different locations around Norwich to mark
Norfolk Welcomes 2019, before being divided into three panels and displayed in libraries across
the county. You can watch a short documentary about this project here.
. 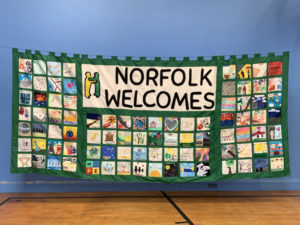