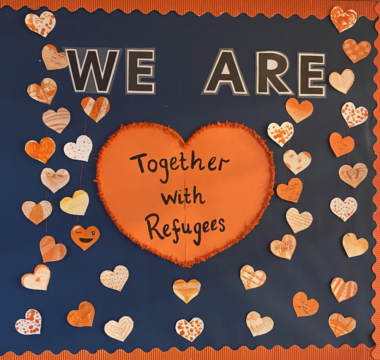 Over the course of the 2021 winter term, schools across the UK joined the wider movement to stand in solidarity with people seeking sanctuary against the Nationality and Borders Bill going through parliament. The Bill is the government’s proposed new rules around nationality, asylum and immigration and the changes represent one of most significant roll back of refugee rights that this country has ever seen.

Given how schools are often the centres of their communities, they have a powerful reach. By supporting students to learn about this issue and then share what they’ve learnt with parents, families and the wider community, schools can help people who would otherwise not be aware of this Bill to understand its dangerous implications and show their support of people seeking sanctuary.  Schools’ efforts to raise awareness of this topic often don’t go unnoticed and are quickly picked up by local or even national press – helping to promote messages of support for people seeking sanctuary and change public opinion. For the students themselves, getting involved in campaigns and learning to contact their representatives about issues of importance to them helps them to become informed and active citizens and see the power of their voices.

This is has been clear in the activities of many of the schools across the network, who joined the Together with Refugees campaign to stand in opposition to this Bill. Using ideas from the Together with Refugee Schools’ Activity Pack, teachers, school staff and students worked together to share their support of people seeking sanctuary and promote the vision of the UK as a welcoming place.

Many schools developed their own ‘Together with Refugees’ orange heart displays to illustrate their solidarity with people seeking sanctuary. In Coventry, students, staff and parents at Earlsdon wrote messages of compassion and support for people seeking sanctuary, combining them to make a giant heart that is displayed in Coventry Carriers of Hope Hub. Orchard School in Bristol did something similar, displaying their heart in the school library.

Some schools took their support a step further. Students at Abbey Roman Catholic Primary School wrote to their MP to express their support for refugees and people seeking safety – and heard back, with their MP committing to continue to push back against the Bill. Students at Holy Cross Primary School in Walmley also picked up their pens to urge their MP to support people seeking sanctuary. Staff and students at St Dunstan’s, also in Birmingham, woke up early one morning in October to wave off a local group of people seeking sanctuary with whom they had spoken who were attending a rally in solidarity with refugees and asylum seekers at the Houses of Parliament. They took with them the students’ banners and posters, later sharing photos of their banners outside Buckingham Palace.

Many schools in Birmingham came together with other local organisations and institutions and local representatives at Birmingham library to voice their opposition to the New Bill and solidarity with people seeking sanctuary. This powerful coalition was featured across local and even national media outlets, see:

There’s still time for your school to get involved – have a look at the Together with Refugees Schools’ Activity Pack and then share photos of your efforts and your orange hearts with [email protected] ofsanctuary.org to be featured in this gallery. 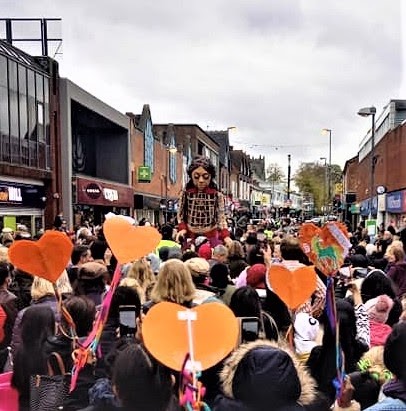